The Best of Southbury

On the Mend Medical Supplies & Equipment 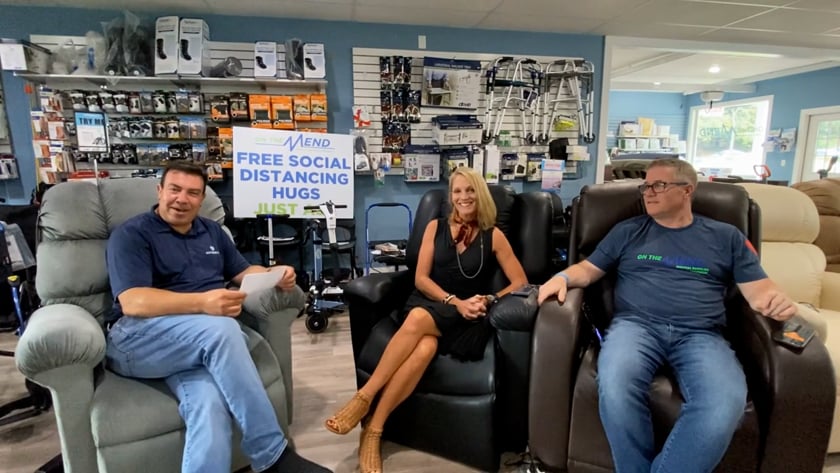 Southbury.com – Hi everyone. Michael, here from southbury.com. Welcome to the first in a series of videos, highlighting local businesses. Today, we’re going to be meeting with the folks at On The Mend, if you haven’t heard of them, they’re located in the union square plaza right next to scoop and ice cream or Southbury Printing. Come on. Let’s go.

Southbury.com – All right. Hi everyone, Michael, here from southbury.com. This is the first in a series of videos highlighting local businesses. And today we’re at on the mend with Liam and Marcy. Welcome guys.

On The Mend – Thanks for having us.

Southbury.com – So first question for you guys is love the company name. I know what you guys do, our audience might not, but how did you guys come up with, On The Mend?

On The Mend – Well, listen, first of all, I’m having a little flashback to that Kramer episode, that Seinfeld, it was a talk show and in Kramer’s apartment, but honestly, Matt, Matt owns a great restaurant down in Shelton called Russo’s. When we were first opening we’ve, uh, you know, we were going back and forth with what the name’s going to be. And we were going, you know, medical supplies and more, and we had all these names and we, it was driving us insane trying to figure it out.
And this was with my old partner who went on to bigger things last year. But, uh, Matt showed up one day. They kind of check out what was going on in here. We didn’t even know, you know, we weren’t open yet. And he said, so what’s the name? And we, I think we said like medical supplies and more that’s awful. So he was like, you shouldn’t even something like upbeat, you know, like on the mend, you know, like I’m on the mend. And we were just like, that’s the name? Like, so shout out to Russo’s restaurant in shelton.
And thank you again for the name.

On The Mend – You know, I’m going to let Marcy, I was thinking I was gonna just hog this whole interview and try to keep her talking, but she said she can’t wait. So honestly, we have a lot of products, but we just sell solutions. We help people stay independent. We help people get from A to B. We help people live more comfortably. So no matter who that is that, you know, certainly our target market is seniors and those aging in place. And then those that are handicapped or disease, but it’s, you know, it’s for everything.
And then Marcy, Marcy will give you the rest of the breakdown. She’s a better talker. She represents us better. She’s got the look, she’s the personality. She brings everything to the table.
Yeah. Okay. So no, he hit on that, we have open retail stores, so it could be anyone senior citizens coming in for orthopedic shoes, compression, stockings, these beautiful reclining lift chairs to a mother or father bringing in their child who tumbled off a trampoline, twisted their ankle skiing accident, something for orthopedic bracing. We really cover the gamut there.

Southbury.com – So this isn’t your only location. Um, how many other locations do you have and how many people actually work for you?

On The Mend – Right now? Uh, not as many as we need to, to run this whole thing, but we have Southbury, which is our flagship store. Mount Kisco store. We opened January 3rd, 2020. And then this past year, uh, April 1st, we opened a store in, Huntington beach, California, with a couple of guys, who used to work here that wanted a shot at this. So we kind of did a hybrid and we’ve become partners with them out there. So we have three locations. They’re doing great out there, max and Steve Retallick and they brought out a guy Rob who’s also like brought a lot to our table. So they’re doing great and it’s fun and proud to watch. And then we have two warehouses in Brookfield that we we’ve run our beds out of, and our chairs and everything else that we need to keep in dry stocks.

Southbury.com – How many employees would you say overall?

Southbury.com – That’s pretty amazing. What’s that time span between opening your first location in Southbury to the other stores?

On The Mend – I started with two and three and now here we are.
And honestly, if we could just get more employees, we’d, you know, I have Avon, I’ve been, we’re thinking about a lot of different things, but, you know, and then I say all that, and then right now we’re closing on Saturday. We don’t have enough people.

Southbury.com – You guys do a lot for the community. You’ve certainly given a lot in the past. What drew you to the Southbury community? And why was this your first store.

On The Mend – In 2015.
Southbury was by demographics the second, uh, the second oldest town in America. So heritage village and the fact that it’s so big, I can’t remember the exact number now, but that was the case in 2018, it became the oldest per demographic. So it was that I had come to a store up here with my mother and experienced really bad customer service. So it kind of always annoyed me. And when I decided this would for a career change, this is what I, what I decided.
And then I was lucky enough to also know the landlord here. And so getting space and committing to it was a lot easier than normal. So you know, he helped me a lot as well.

Southbury.com – Got it guys, thank you so much. It’s been an absolute pleasure. This is obviously the first of many that we’re going to be doing highlighting local businesses. And I just want to thank you for taking the time.